First off your idea is not terrible or crazy, weird maybe, complicated probably, bizarre at best and a rehashing at worst. The most exciting thing about creating science fiction is the fiction part. The science part, fortunately, is made up too. So what’s stopping you from getting started? 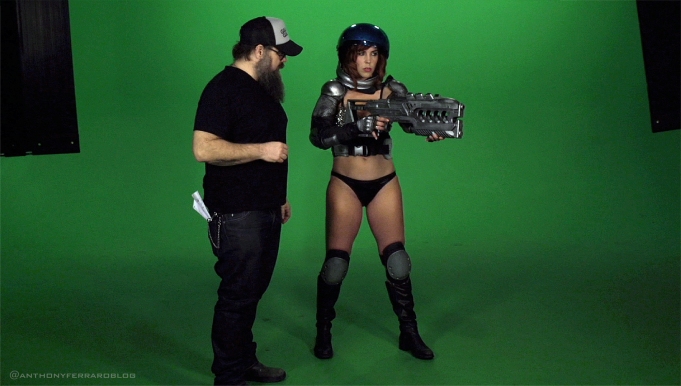 Should you take a writing course? No. Should you map out the world and characters? No. Should you download screenwriting software? No. The best and easiest thing to do is to just start writing. Well that’s not easy you are thinking, maybe even said that out loud. Yes, it is if you just write.

I recommend you start bringing your world to life by Free Writing. For those who do not know, what is Free Writing? Free writing is a prewriting technique in which a person writes continuously for a set period of time without regard to spelling, grammar, or topic. It produces raw, often unusable material, but helps writers overcome blocks of apathy and self-criticism. Some writers use the technique to collect initial thoughts and ideas on a topic, often as a preliminary to formal writing. -Wikipedia

I find this particularly useful in sci-fi. For example in my show Galactic Galaxy my main character Fen is a Space Werewolf. I wrote the first draft of my series in a Free Writing session a few years ago. Honestly, I have no idea why I wrote “Space Werewolf”  but, for some reason, Space Werewolf appeared as I was quickly describing the character. Now three years later I can tell you Fen’s estranged father was not a Space Werewolf but was, in fact, the son of a prominent  Space Werewolf family on a Wolf Planet where his father was ostracized because he was not born a wolf. He was teased and bullied and as a result when he was a young man he left home in a rage to conquer the galaxy. When his son Fen was born he abandoned him because he was Space Werewolf, a Luna Lucan. And on and on. If I had spent weeks toiling over the character I would not have come up with something that interesting. I have several more examples but you get the point.

I suggest you start thinking about your world, your story, the characters and just start talking about it. Talking to your friends or people online in sci-fi groups. Start saying I have this idea for a story and describe the characters, talk about what you think happens, tell anyone who will listen. If you do not have friends or are not comfortable with that, start thinking about it.  Do that until you are ready to burst or are just sick of talking and thinking about it. Then pick a time, day or evening what ever works for you. Give yourself at least a 4-hour undisturbed window. Pick your spot, your bedroom, the computer desk, your kitchen, the library. I did mine in a coffee shop because even though its public no one disturbed me there. You should write on a computer in Word, Pages, Google Docs or any free text editor program. The reason is once you are done writing you will mine your gold from the document with some basic copy and pasting.

I simply ask you to get started and let your sci-fi freak flag fly. Sit down and just write your idea – don’t stop. Spelling and grammar be damned, just look at the keys and type as fast as ideas occur to you with no regard to structure or plot just let the ideas rip.

Later you will go back and add structure and context and start to build your script. But first just take a pass and clean it up into a readable short or long story. Still, hold off on the screen format. Just tell your story. In other posts, I will go over with you how to start crafting your series into a workable document.

I’ll leave you with this to think about. J. R. R. Tolkien claims that he started The Hobbit suddenly, without premeditation, in the midst of grading a set of student essay exams, writing on a blank piece of paper: “In a hole in the ground there lived a hobbit”.

Be sure to watch my video channel for more Sci Fi filmmaking giddy-up.

One thought on “Your Impossible To Make SciFi Series Idea Will Be A Rewarding Experience. So Start Free Writing it.”