In my first version of Galactic Galaxy, I closely followed the Hero’s Journey structure as laid out by the late great Joseph Campbell. I was 100%  committed to following that narrative structure. It was an exercise for me, my own hero’s journey in a way. I was so motivated that I wrote a twelve episode arc. That original script was 12 episodes and they were 20 to 30 minutes long. I can’t even Imagine what that budget would have been, but it would have been unrealistic. The value of that process was I was world-building, creating my characters and the foundation of the show.

It was important for me with this project to collaborate with as many people as possible. In all my projects prior, I was a one-man show and although I got good at that, I wanted to break the habit. The first draft of Galactic Galaxy was too spread out. I enlisted the help of another writer, John Plunkett to take my first draft and wrench it into a tighter script format. It was imperative to get perspective and focus.

Early on when I was floating the script out to friends and colleagues to read and give first impressions I could tell right away people were not reading past the first episode. It was too exhausting for them. This was a problem, a major problem. I knew the story was interesting and there was lots of humor but clearly, something was not working. It was just too dense.

The decision to scrap that script and start over was a big move for me as a creator and as a human. I scrapped that whole script, almost a year’s worth of work and went back to the drawing board. The positives have I had my characters, locations, and a basic storyline. I just needed to rework it. Also, it’s much easier to take away content then to add it.

I’ve always been curious about the mythical “writers room” that just sounded to me like an amazing thing to be part of. It occurred to me I could… create one? So I did that. I rented a big production office for a week and put an ad on craigslist, I should mention I’m in Los Angeles so the talent is around. I simply said upfront, I have a limited budget for five full days and we will write six 5min scripts. I got a lot of great responses to the add,  some from crazy town but that’s part of the process. I was able to narrow the people interested down to ones that seemed like a good fit and after a few very brief phone interviews I had a writers room.

Through that straightforward process, I was able to get three very talented writers. Among them was Charles Horn who was a writer on the Robot Chicken Star Wars Show. That was one great aspect of being in Los Angeles. He simply was not working that week on anything else and agreed to work within my limited budget. Myself and the other two writers dove right in. Day one I introduced the world and characters and my basic plot outline to them and we roughed out the outline for the season. We then proceed as a group to write 2 episodes a day and on the final day did a few rounds or rewrites. The writer’s room did not disappoint, not only was it very effective but it was an experience I hope to one-day repeat. 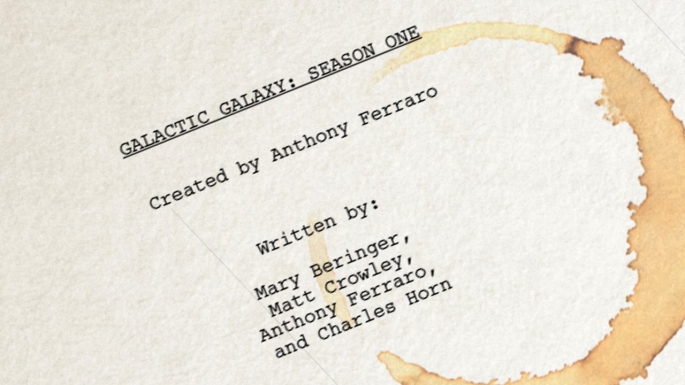 We came away with a very strong script that I was proud of and excited to make. The reactions from friends and colleagues to this version were a stark contrast to their original response. The reactions were all positive and I know they were sincere because it was as a weight was lifted and they could tell me how much they were confused and uninterested in the first draft, its a process. One that not only works but is essential.